If You're Undergoing Bullying and Defamation.

Tamira Thayne was the victim of severe defamation and online bullying. She offers the following advice to others who may be experiencing it.

From It Went to the Dogs: How Michael Vick's Dogfighting Compound Becames a Haven for Rescue Pups:

Most folks don’t leave rescue because of the animals, although compassion fatigue is very real, and it affects many who work in the field. The more animals you care for, the harder your life becomes. That’s just a fact. Yet, I would wager the single greatest cause of good people leaving the movement is the defamation by those who, for whatever reason, seek to destroy others, both online and through the use and manipulation of local authorities.

If you’re undergoing defamation on top of the day-to-day strain of caring for the animals, it can quickly throw you into depression, and a feeling of helplessness and hopelessness can take hold. At this point, you’re headed for a crisis situation.

If money is not an issue for you, and you can afford to sue the pants off of them, consider doing it. Bullies are cowards . . . when the going gets tough, they pack up and go find an easier mark. Not only that, but in our online world, bullies often gather a group of minions to do their dirty work for them. Once those minions scatter, the bully’s power is greatly diminished.

Most sycophants WILL run for the hills once court action starts.

Suing, of course, involves a lot of evidence collection; and, if you lose the case in court, it will send more trauma your way. If the bully wins, they are empowered and the abuse will escalate.

Wading in and collecting evidence of the defamation also exacerbates your trauma. Ensure you are in therapy or have a great self-plan in place before doing so. It’s ugly and painful to read the lies these folks put out there about you.

One of the Sandy Hook fathers sued and won $450,000, but he’s spent years and an untold amount in the course of fighting back. Lenny Pozner was quoted in the Washington Post as saying, “The damages awarded me for Mr. Fetzer’s prolific defamation and harassment are significant, not so much for the dollar amount, which I will likely never see due to Mr. Fetzer’s economic reality, but for the precedent that it sets. This sends a message to hoaxers and conspiracy theorists and others, who seek to use the Internet to revictimize and terrorize vulnerable people, that their actions have consequences. When you defame people online, that has consequences.”

Given today’s internet situation and the empowerment of those with personality disorders and malicious tendencies to go after those they perceive as having “wronged” them, you have to find a way to work around these people. Defamers will never totally disappear; worst of all, they almost always have severe mental afflictions that allow them to lie and manipulate public sentiment against you without a shred of guilt or remorse.

How does one even combat that kind of conscienceless behavior?

The damage they seek to inflict can be neutralized in the public view by making the facts readily available. Highlight your annual 990 IRS forms on your website, show photos of all your dogs.

Most importantly, invite people IN! If you have nothing to hide, hide nothing.

Depending on the situation, I would also suggest hiring someone, a third party, to investigate. Maybe a retired police officer or a private investigator who loves animals. This person would show up—at an undisclosed time—at your property to inspect everything, take photos, and interview staff and volunteers. Then they would attempt to speak with the people who are defaming you, asking them for evidence of their claims—they don’t usually have any, thriving on insinuations and promises of evidence “to come”.

It would behoove you to make the resulting evaluation public, or at a minimum provide it to those who email you about the situation. Hopefully this evaluation would exonerate you, or at worst point out a few areas you could improve in, thereby discrediting those who are trying to destroy you.

Another thing to check for? Criminal records. Many of those who have no compunction about destroying others have criminal records or other such reports of bad behavior. Do a background check.

Bullies love an easy target. Unfortunately those of us who work with and for the animals are sensitive souls; these kinds of wounds slice deeply and do lasting harm to your emotional well-being.

Remember to showcase all your happy animals and testimonials! It will at least give you a fighting chance.

I wish you all the best of luck.

Please Take Care of YOURSELF Too.

For rescue or sanctuary owners going through the pain of defamation and online bullying, I suggest the following self-help regimen:

1. If you are in an emotional crisis, please seek professional help. Sometimes the trauma of the abuse can simply be overwhelming. Having someone to talk to each week—who isn’t involved in the drama and is paid to listen to you—is therapeutic. When you don’t know who you can trust, the confidentiality provided by these sessions gives you a safe place to release the pain (and tears) you’ve been holding in at work.

2. Tapping. For between sessions, or for those who cannot afford to go to therapy, I recommend tapping. It can be done with just you, in a few minutes per day, AND there is a free tutorial website by the founder of the method, Gary Craig, you can use to train yourself.

Start your tapping journey here, and let go of the pain each day. https://www.emofree.com (Here you can download his free e-book.)

(P.S. I receive no compensation of any kind for this plug . . . I just use tapping on a daily basis, and I know it’s helpful for me.)

3. After you’ve done your tapping for the day, bring some positivity back into your life by keeping a gratitude journal. This is a simple daily exercise that helps you focus on the good in life, once you’ve let go of some of the hurtful. This exercise will only take minutes a day. To do: make a list of ten items you’re grateful for, in the following format. “I am grateful for _______________, because ____________.”

What’s most important about the gratitude list is that you FEEL GOOD when you write it. So dream big, and bring up some true feelings of happiness to pour onto the page. 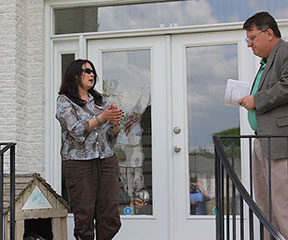 Tamira is available for speaking engagements on defamation and bullying in the animal rescue and animal rights movements, in addition to acting as an independent investigator in cases of defamation (limited cases). Email her at tami@whochainsyou.com with your needs.